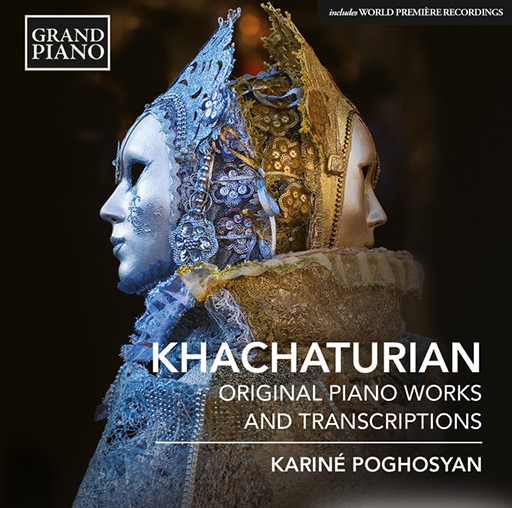 “Poghosyan immersed herself in the piano music of Aram Khachaturian to such an extent that her performances have elevated the music to a higher sphere.  I know this for certain as I have played many of these pieces and found details of inflection, rhythm, and technical prowess that I had not imagined the music possessed.  This is an important debut recording and it brings to us in Karine Poghosyan’s work, a pianist that we should hear as soon as possible in recital or on disc.  Khachaturian would be excited to hear his colorful works played with such idiomatic styling.  This is Khachaturian playing that will not be rivaled!” – David Dubal, pianist, author and radio host

“Kariné Poghosyan is an Armenian-American pianist teaching at the Manhattan School of Music. With a scholarly thesis on the piano music of Aram Khachaturian to her credit, her latest recording Khachaturian – Original Piano Works and Transcriptions demonstrates the affinity she has for this composer’s work. The disc includes a new piano transcription of the Masquerade Suite with its familiar Waltz, and the Suite No.2 from the ballet Spartacus, in a new arrangement by Matthew Cameron. Both performances are world premieres but the latter is impressive for the way it presents the ballet’s well-known main theme, particularly in its wide, sweeping orchestral gestures.

Also on the disc is Poem, a very early and somewhat troubled work that Poghosyan performs with conviction, finding great serenity in the quieter sections to balance the work’s darker passages. The recording’s finest piece is, however, the Piano Sonata from 1961, one of Khachaturian’s few formal efforts in larger forms. The opening movement is breathtaking for its relentless motion that only has a brief respite midway through. Poghosyan plays this brilliantly and brings it to an edge-of-your-seat close. The second movement is remarkable for its unfamiliar and sometimes experimental language. The final movement brings back the energy of the first but with more intensity. This must be an exhausting piece to perform live. It is excitement combined with mystery and Poghosyan plays it masterfully.” – Whole Note Magazine, March 2016

“The Toccata,” an early composition played with unnerving rhythmic veracity by the wonderful Kariné Poghosyan, an ideal interpreter of this music, is more than a mechanical perpetuum mobile, but a compelling rhythmic fantasy. Elsewhere, Matthew Cameron’s remarkable, luxurious, and ever-so-pianistic transcription of the composer’s ballet music from Spartacus celebrates the original’s affecting melodic content most persuasively, and with considerable imagination and abandon, too, thanks in no small measure to Poghosyan’s rhythmic dynamism. Poghosyan brings the same outstanding qualities to her performance of the piano sonata, a work given its premiere in 1963 in St Petersburg by Emil Gilels, nearly two years after its composition. The limpid yet hypnotic sensibility that she draws from the second movement, Andante tranquillo, pays homage to a work that denies, within minutes and by virtue of its cumulative organization, any tranquility whatsoever.  Again, in Alexander Dolukhanian‘s affecting arrangement of Khachaturian’s 1941 incidental music, Masquerade, Poghosyan’s motoric mastery proves irresistible. Poghosyan is an exceptionally gifted artist who sports a larger-than-life technical apparatus and brings a comprehensive musical understanding to all she plays, admirable qualities that assure there will never be a dull moment. The sound quality of this CD is superb: warm, opulent, and inviting.” – John Bell Young, Fanfare Magazine, July 2015